Last night I attended an introductory workshop on “Women, Peace and Security” (WPS) run by the UN Women‘s Canberra office. The 30 minute video: ‘Side by Side’ provides a great introduction to the issues. ‘Side by Side’ refers to the ideal vision that both men and women will work ‘Side by Side’ to solve this and (other) world problems.

In a nut shell, WPS is about understanding the unique ways conflict affects women and the crucial importance of women being involved in post conflict talks. For example, rape, or ‘Sexual Violence in Conflict’ (SVC), is a ‘weapon’ or a ‘tactic’, yet we have not yet worked out a good enough plan to prevent or defeat it. In the 1994 Rwandan crisis it is estimated that between 250,000 to 500,000 women were raped. In the Side by Side film, one military Commander who had worked in the Congo commented that he was utterly unprepared for how to cope with a mass gang rape scenario, as were the front-line soldiers who came across it. So let’s prepare them.

Also, in conflict scenarios, as men tend to go off and fight, often women are left running the show. However, a consistent planning error is that when eventually post-conflict talks begin, the women tend to be left out of the discussion. Men, who don’t know the ins and outs of the workings of the community, are at risk of making ill-informed decisions about the community’s priorities. For example, they may have no awareness that safe guarding a path to a particular water point is in fact priority number one. There is stacks of evidence now that involving women in the decision-making leads to more durable solutions. So let’s make that happen too.

The workshop introduced some basic concepts that need to become part of the everyday security lexicon in understanding sexual violence and how to respond to it: stigma; re-traumatizing; the power of cultural norms; safe conversations; challenging power relationships. But this is just the tip of the ice-berg. There is more to learn and understand so as to ‘make this happen’ the right way.

The global conversation is getting there slowly. There are now a handful of UN Security Resolutions on gender issues, with UNSCR 1325 being one of the more important. Australia is currently drafting its ‘National Action Plan’ on how to ensure such resolutions are main-streamed into any conflict, peacekeeping, peacemaking or aid type missions it may be involved in. In Feb 2014, a discussion paper on this topic was released by the Australian Civil Military Centre, and the ADF Conference on this issue is scheduled for mid-June 2014. This is the week after the  Global Summit to End Sexual Violence in Conflict, 10-13 June 2014 in London, head-lined by Angelina Jolie.

Papers – conferences – this is all good news, but the trick will be to develop excellent responses; tangible tactics and strategies that actually work. The issue will not be solved by women’s groups working alone, or by separate groups of predominantly male war-fighting tacticians. In these conferences, ideally we will see women and men working, talking, listening ‘Side by Side‘.  The quality of this conversation, I would argue, will be the game-changer in whether good, strong and do-able tactics emerge, or don’t. 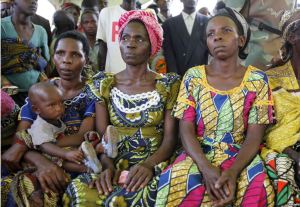 One thought on “If sexual violence in conflict is a war tactic, let’s work out how to prevent & defeat it.”